One in the Meadow Ridge Court area and another in the area of Black River Rd & Dartford Road.

The eastern coyote has stirred as much interest and emotion as any other animal in Pennsylvania. Seeing a coyote or hearing the howl of this wild, wily animal is a great reward of nature to many people. Others fear this animal just knowing it is in the wild. Some sportsmen dislike coyotes because they think the predators kill too many game animals. Trappers and hunters find coyotes to be especially challenging. Some farmers lose livestock due to coyote predation. The coyote has been referred to as the brush wolf, prairie wolf, coy-dog (misnomer) and eastern coyote.

Fossil records indicate coyotes have existed in what is today eastern North America since the Pleistocene period, a million years ago. Occurrence has been intermittent over that time, and only in the past 75 years has the animal appeared to become common. The coyote's status in Pennsylvania during the 1700s and 1800s is clouded with that of the wolf. Old bounty records indicate both coyotes and wolves from other sections of the country were fraudulently turned in as wolves here during the late 1800s.

Little is known of the wolf in Pennsylvania, or if indeed the same animal now called the "eastern coyote" in fact might have been similar to the wolf of the past. Pictures dating to the 1930s have appeared over the years in the Pennsylvania Game Commission's magazine Game News. These animals look like the same coyotes being killed today. The first coyote identified as an animal similar to what we today call the "eastern coyote" was killed in Tioga County in 1940.

In the late 1960s, it appears an influx of coyotes entered northern Pennsylvania from the Catskill Mountains in New York, and from there they spread south and west across the state. In the 1970s, the highest population in Pennsylvania was in the Pocono Mountains. The coyote continued to expand its range during the late 1970s and occupied the entire state by 1990, with the highest populations across the northern half of the state.

The eastern coyote is much larger than its western counterpart. Adult males in Pennsylvania weigh 45 to 55 pounds. Females are smaller, weighing 35 to 40 pounds. Total body lengths of eastern coyotes range from 48 to 60 inches. Their pelage colors range from light blond to reddish blond to gray, and from dark brown washed with black to black. Generally, coyotes are gray to a German shepherd coloration. Their legs are gray, tan and reddish, often with black markings or lines down the front of the front legs. The cheeks and behind the ears are reddish or chestnut colored. Blond, reddish and black coyotes might not have any noticeable black stripes on their front legs. A coyote's ears are erect and its bottle-brush tail usually is held in a downward position. Normally, its eyes are yellow, but some with brown eyes have been found.

Coyotes are monogamous; they maintain pair bonds for several years. The social unit centers around the mated pair and its offspring. However, the delayed dispersal of some offspring might result in extended family relationships beyond a year. A social group occupying a territory might include a pair of adults (generally more than a year old), transients (ages 6 to 18 months), pre-dispersing subadults (usually less than a year old) and nonbreeding associates that are more than a year old. Observations indicate other coyotes living in a territory might help provide food to a growing litter.

Normally, females do not breed until their second winter, but there are cases of some yearling females breeding and producing litters. They have one heat period that lasts four to five days, usually in February. The litters are born from mid-April to early May, and litter sizes average five to seven pups. Coyotes compensate for unusually high mortality by having larger litters. Known denning sites range from beneath overturned trees, piles of tree stumps, rock dens, and dug-out red-fox dens. Dens usually are located on southerly exposures. The pups are moved frequently to new dens to avoid detection.

Young coyotes begin to disperse from the family group during October, when they're 6 months old. Studies in Pennsylvania indicate some juvenile coyotes dispersed up to 100 miles, but 30 to 50 miles is more common.

Coyotes use a variety of yips, barks and howls to communicate and periodically assemble into larger packs. Coyotes at times will "pack" and at other times will hunt alone or in the company of another coyote or two. They primarily are nocturnal, but often hunt during daylight hours, especially in the morning. Howling might occur at any time of day, but the highest activity usually is at night. A coyote's senses of smell, hearing and alertness are especially keen.

The coyote has adapted to a wide variety of habitats in Pennsylvania. The animals can be found in the heavily forested northeast and northcentral regions of the state, in dairy and cropland areas, and even around the heavily populated areas of Philadelphia, Harrisburg, Pittsburgh and Erie. Coyotes prefer heavy, brushy cover found in places such as clearcuts, and they often live along edges between forest and agricultural areas where prey is abundant.

The coyote is a generalist. An analysis of 300 coyote scats collected in Pennsylvania indicates a wide array of food items in the coyote's diet. Mammals from at least 13 genera were found, ranging from small mice and voles to deer. Overall, deer was the dominant food, occurring in 57 percent of the scats. It's not surprising deer are an abundant food source, given the high deer density in many areas and the large number of deer killed on the highways, lost to starvation or dying for any number of other reasons.

Rabbits and woodchucks ranked behind small mammals and deer as important food items. Birds were found in 10 percent of the scats, and insects in 18 percent. Plant material occurred in 50 percent of the scats. Various kinds of fruits are important foods during the late summer and fall, but plant material appears important on a year-round basis. While no livestock was found in the analysis, predation on sheep, chickens, ducks, goats and domestic rabbits does occur, but at a low rate. However, depredation can be significant in localized areas or at certain farms.

Coyotes are found throughout Pennsylvania, but are most common in the northern half. Mortality from hunting and trapping approaches 60 percent for young coyotes, and only 15 percent for adults.

Coyote populations throughout North America have continued to expand, despite man's attempt to control them. If there's one thing we have learned about this intriguing animal, it's that the coyote, not man, controls the coyote's destiny. 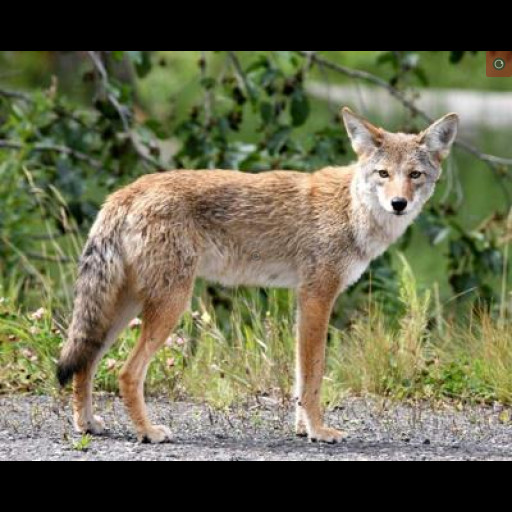